For 3-4 years, when I was a teenager, this book was my most prized possession. Well, not this book. Rather, my previous copy. The one I used so often it disintegrated. The one held together with hot glue and hope. The one I replaced a couple of years ago because it was a total mess.

There's something a little frightening about coming back to something so cherished. I recently revisited something I once kind of liked (The Complete Fighter's Handbook) and found it to be a lot more inconsistent and problematic than I remembered. Perhaps my reactions here would be even more extreme, and I'd be forced to throw my cherished memories into the scrap-heap of "things that kids are too ignorant to know are bad." But hell, discovering things like that is half of what this blog is all about.

So, The Complete Psionics Handbook?

Um, it's my favorite thing in AD&D thus far, but that's much fainter praise than I'd have imagined in 1996 (This book was published in 1991, but I didn't get it until '96). Thankfully, its aged well, politically. It's not perfect. There are things I could harp about. The art in this book (with a couple of exceptions that look like they were pulled out of one of those Time-Life Mysteries of the Unknown books) is absolutely amazing, illustrating various cool-looking fantasy psychics using the specific powers in the books, and near-universally captioned with some over-labored wordplay ("Animate Object: Raji turns the tables on his attackers"). But if you look carefully, you'll notice that in 15 pieces of art, there are only 4 women. That's total. Counting not just the main subjects of the art (and if the art shows a psionicist, it's a man 100% of the time), but antagonists and people in the background. And of those background women, two of them are dead and only showing up in a psychic vision. There's no one piece that I would specifically call out as problematic, but as a set, it's pretty bad.

But there's nothing in there that makes me look furtively around the room in case someone is reading over my shoulder. It's embarrassing that I didn't notice the gender imbalance, but what can I say, I was 14 and privileged.

The other thing that may have lost its shine is its mechanics, and yeah, this book has problems there too. It's not so much that some psionic powers are underwhelming, it's that they exist in a game with ridiculous magic. And it's not so much that the psionicist is a poorly-designed class, it's just that it leans very heavily on ability-checks and in AD&D, it's a dead certainty that your abilities are not going to be very good. Take a random power, like Life Detection. If you've got an 18 Intelligence, then making the Int -2 check required by the power is pretty simple. Eighty percent of the time, you're detecting life. But 18s are supposed to be pretty rare. A 1-in-216 chance if you're going by the default rules, and not much higher if you're using one of the other random stat methods. It's not something I noticed at the time, because my group wound up just using a highly unbalanced and non-canonical form of point buy, but looking over the numbers now, as a guy with a math degree, they are damned punitive. A more realistic psionicist, one who only has the bare minimum of Intelligence, would only have a 50% chance to detect life.

I think psionicists could work, even as written, as an alternate AD&D magic system, but in a game where mages can do better stuff with 100% precision, it's mostly just a class for players who like to do weird for the sake of weird (ahem, or so I've heard). I think in a game where the thief only has a 45% chance to climb walls, messing up roughly half of your psychic powers is just par for the course.

I think I still really like this book. It was the fifth one released in the PHB Supplement series, and it's sort of awkwardly straddled between the first four books, which feel more like they used the class as a jumping-off point to talk about other rpg topics, and the rest of the series, which really delved in to honest-to-goodness variants and explorations of the classes' themes. The Complete Psionics Handbook doesn't have any of that early-series cruft. We're not talking about Amazon Psionicists getting a completely unthematic attack roll bonus, or Peasant Psionicists who add basically nothing to the class. Yet we're also not talking about specific Psionicist kits which allow players to do a deep dive into pop culture psychics and tune their characters to resemble their favorites from various movies, books, or tv shows. The book is on-point, but never exceeds the merely functional. Inspiration will have to wait for Dark Sun supplements.

Honestly, though, I think it comes from having to devote so much space to building the class up from scratch. It spends 78 of its 128 pages on power descriptions, not leaving a lot of room for variants or off-topic tangents.

I'm actually pretty happy with how this read turned out. I can't say that I'll be stampeding to use AD&D psionics again any time soon. And with the exception of the art, there was very little in this book to surprise and delight. But also it wasn't ruined. I am still comfortable counting this book among my prized possessions.

UKSS Contribution: This is a pretty generic, setting-agnostic book, so there's not a lot here that can simply be repurposed. The most iconic monsters are pretty damned goofy (like the psychic parasite that looks like a platypus skeleton), but there are a couple of cool ones. However, I think I'm going to have to set a new ICFTB precedent and choose something not from the text, but from the art 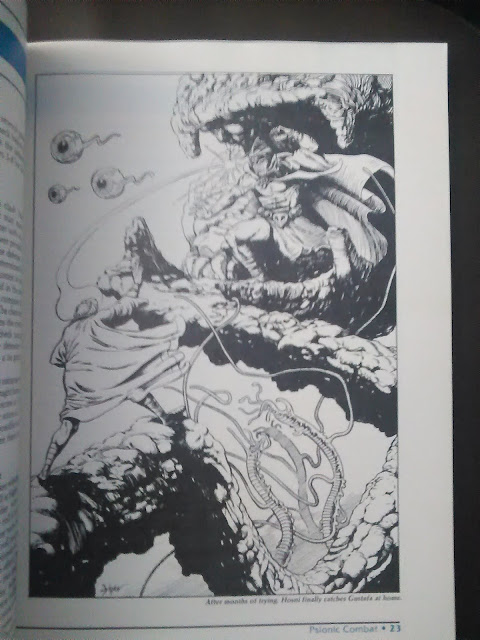 Obviously, I'm going to have to come up with some elaborate fanfiction about Hosni and Gustafa. Who they are. What they're doing. Why there are flying eyeballs and tentacle flora in the background of their fight. But damn, this is the sort of next-level pulp sci-fi weirdness that I am hungry for.
Posted by John Frazer at 10:00 AM