So let's just jump straight into the worst thing about it - the fucking lists.

Lankhmar: City of Adventure likes to build its world by listing things. There's a five page list of potential NPCs drawn from the Lankhmar books, and maybe that sounds like a pretty useful thing, except that most of the entries are like:

He is one of Gray Mouser's crew on the ship Flotsam. He was once a thief in Lankhmar.

Now, to be fair, I did pick one of the blander entries, but not by an exceptional amount. There are 50+ more of these. And then, in the next chapter, it lists the Guilds:

Unquestionably one of the most powerful guilds in Lankhmar, the Thieves' Guild has had good and bad times recently. They virtually controlled the city until the dead master thieves revived the ancient worship of themselves, at the cost of some living master thieves.

No women are allowed into the Thieves' Guild. A thief must be a guild member to work in Lankhmar. Consequently, Fafhrd and the Gray Mouser are constantly in trouble with the guild.

I actually chose one of the more interesting fantasy guilds there, because I wanted to convey to you how much detail was given to one of the setting's signature elements and the single most anticipated antagonist for those who come in having read the source novels. So what do you think the other 30+ Guilds are like? Thank you, Lankhmar: City of Adventure, now I know that the Jewellers' Guild buys and sells jewelry. That was worth cutting two paragraphs worth of adventure-related material.

Although, again, I have to concede that most of the Guild entries do contain at least a sentence or two of pertinent world-building. However, the point stands - this is not a campaign setting that uses its page count well. I mean, look at this thing: 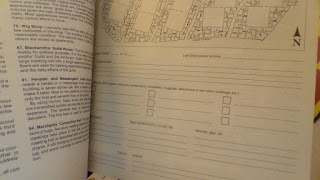 I kind of like the idea of these geographical worksheets, but there are 11 of them in a 96 page book. And it's not like they needed to be there. Was AD&D really expecting me to write in my book? A single generic template near the end would have served just as well.

Overall, I'd say that Lankhmar: City of Adventure really struggled with the single most difficult aspect of making a licensed rpg - curating the source material in such a way that the world could stand alone, without the source's specific plots or characters. There's not quite enough here to make a new Lankhmar story, minus Fafhrd and the Gray Mouser, and there's definitely not enough to create a new Fafhrd and Gray Mouser story, despite the fact that both characters are included as preconstructed PCs.

So why do I say that the book's strengths outweigh its weaknesses? Because it is abundantly clear that Lankhmar: City of Adventure is on the right track. The book opens with a bunch of summaries of the canonical Lankhmar stories, and just about every one sounds like someone's dumbass D&D campaign . . . in a good way. Like, I read a bunch of these things in a row and  my thought was "Oh, I get it - Fafhrd and the Gray Mouser were the original murderhobos."

It's not hard to see the potential here. The city of Lankhmar, with its corruption, its competing factions, and its open criminality, is a place that is the perfect base of operations for a "dungeon crawls = thinly veiled home invasions" style of game. It wouldn't quite be accurate to say that it reads like a parody of D&D, because it is a throwback to one of D&D's main inspirations, and so it's more like a distillation of something highly specific that's been inside D&D from the very start.

And it's obvious that this could work well, but Lankhmar: City of Adventure, as a specific book, really needs to be less Saints Row and more Saints Row 2 (actually, I'd prefer Saints Row: the Third, but that's just the kind of game I like to run). Or, to get away from an obscure and alienating metaphor - what this book really needed was a thesis, and not just an inspiration.

For example, you may have noticed from my picture above that one of locations deemed important enough to make it onto the map was a wig shop. And that's a very strange and specific choice that should say a lot about what you want your game to be. However, it's presented in the most straightforward way possible and it becomes clear, later on, that it was included because it was a place frequented by the Gray Mouser in his canonical adventures.

That's not the way you're supposed to do it. The map entry wastes one of its three sentences telling us that "The building is five stores tall and in reasonable condition." Who the fuck cares?

Sorry, I don't mean to be nasty. Put the pieces of the puzzle together and you get a shop run by a sweet old lady that nonetheless manages to survive in a city of thieves by selling wigs, makeup, and costume pieces of high enough quality to make it into the regular toolkit of an adventurer-thief, and it's a completely ordinary thing. That's a great setting element. What the players (and consequently, the DM) need to know is what the experience of entering the shop is going to be like. What old lady knicknacks are on the counter? What shady customers are you likely to bump into when you visit? Does Laaryana know that her shop is a hub of criminal activity, or do the rough customers who buy her disguises play it cool? What's the social contract here? For the love of all that is good and pure in this hobby, the detail that "the second floor is used by a tailor [and] the others are rented out as apartments" could not be less relevant to the role this wig shop is going to play in a typical campaign.

It's hard for me to forgive how utterly workmanlike this book is. Its factual tone doesn't stop it from being camp, it just ensures that the result is bad camp. Someone point me to a version of this setting that knows what it's about.

Although, if we're going to not forgive this book for anything, it really should be for how unreflectively sexist it is. I hate to bring it up, because I actually have a lot of goodwill towards the book, despite my grousing, but it is not something that's in line with contemporary sensibilities. I go back and forth on whether it's even plausibly deniable enough that you could willfully ignore the sexist elements.

I think . . . probably. Certainly, there are White Wolf books that are worse. Most of Lankhmar: City of Adventure's worst offenses are merely careless. Like above, where it just casually mentions that the Thieves' Guild doesn't accept women. And I get that this is something it inherited from the source material, where it's a significant plot point, resulting in Fafhrd and the Gray Mouser teaming up with several different lady thieves in the course of their rivalry with the Guild, but the book doesn't even consider that this might be a burden for female players. I'm not sure it even entertained the idea that women might want to partake in Lankhmar adventures.

I went back to check the NPC section, and it does not do the thing where it gratuitously lists every female character's Charisma stat. I only thought it did, because it does it half the time. It also contains this doozy of a detail: "[Eesafem] was insane for a brief time until magically transported to Lankhmar where an early morning seduction by the Gray Mouser returned her mind."

What the everliving fuck?

Lankhmar: City of Adventure mostly made me yearn for a more self-aware, contemporary take on the source material. I can understand how it blew some minds in 1985, but from my perspective, we've got 35 years worth of proof that it's possible to do better.

Ukss Contribution: Man, that part where Gray Mouser cures a broken lady brain with his dick makes this a hard one to include in Ukss, but my opinion is that it's more ignorant than malicious. Its worst offenses are unfortunate old tropes.

Anyway, the choice here is Cash Street. Lankhmar in general has these on-the-nose street names that really do deserve to be in a more anarchic book ("Atheist Avenue," "Cheap Street," "Cutthroat Alley"), but Cash Street is the most iconic and versatile. Just a total fuck-you to any pretense that you're playing a civilized game of heroic adventurers. It even makes me forgive the existence of Pimp Street, if only because I imagine that Lankhmar's gangster rap writes itself ("If you want to find me, check the corner of Pimp and Cash" - an actual Lankhmar address).

In the interest of helping out my fellow internet authors, I'll add a few PDFs to my list. If you are officially connected to a game and you want me to review it, just send me a link or a review copy over email at srgrvsalot@yahoo.com
It's first-come, first-serve and my goal is to try and get through one a week, so there may be a wait, but the whole point of this blog is to get through everything eventually, so unless I completely burn out, I'll get through them all eventually.
Misfortune - Dramatic Roleplaying
Cosmic Cutthroats RPG
Enthusiastic Pirate Bois
Player's Guide to Fonts of Power
Trail of the Vagrant Star
Alpha-7
Genius: the Transgression
ESPRE Essential Players Guide
Mice-men of Mirewald
Academy Arcana
Ops & Tactics: Modern Combat Manual
Trinity Field Report: Oceania
Arc Quickstart
Sufficiently Advanced, 2nd Edition
Sorcerously Advanced
Trinity Continuum: Amalgamated Idea Dynamics
Trinity Continuum: Pets
Trinity Continuum: Polyphemus
Trinity Continuum: Les Fantomes
Swine and Cheese Party