"Ascension's Right Hand" is kind of a badass name for such a workhorse of a book. It's about playing non-mages in the Mage: the Ascension universe, and it's fine.

So I guess I should be starting in with the Ukss contribution then. . .

Maybe not, though. Maybe even a book as bland as this one needs a little more than a perfunctory quip. It's just haaard. What do you say about a book that says about itself, "flamboyant superpowers really aren't appropriate for the Gothic-Punk setting." (You know, right before the section where it described said superpowers).

It's one of those annoying things that older rpgs did where low-power games were somehow supposed to be more virtuous than high-power ones, but it's kind of a false dichotomy between spectacle and theme. Especially with a game like Mage, where the spectacle is the theme. There's plenty of talk about intrigue and betrayal and romance and how "custos" (ie "non-mages") are motivated by bribes and threats, but it never quite catches on to the idea that the main draw to serving a mage would be the opportunity to enter the world of magic.

An ingenue who stumbles on to the occult after accepting a job from a mysterious weirdo is a staple urban fantasy plot and Ascension's Right Hand correctly intuits that there are great stories with that setup, but then it sets that intuition aside and instead objectifies custos at every turn. Everything they do is framed by what it means to mages. I keep saying that Mage: the Ascension is about religion, but maybe this is something that's only apparent with critical distance, because there's almost nothing in this book about the custos' own religious journeys.

Then again, if you did that, there'd be an uncomfortable overlap between custos and mages. As it is, non-mages can buy True Faith, Hedge Magic, and Psychic Phenomena, which are different from Sphere magic because "shut up, that's why, and also you're supposed to be using the 'k'." So yeah. Custos get magic and Mages get magick and that's the difference.

I think this overlap might have something to do with the book's overall blandness. It feels like it's checking off boxes, filling a niche that logically must exist, but doesn't have its own pitch. Someone must be cleaning the mages' toilets, buying their groceries, and standing in the background of their elaborate rituals. Why not tell those peoples' stories?

The answer to this turn out to be because you'll wind up covering all the same story beats and themes as mages, but their arc ends in failure rather than success. They leave their mundane lives behind to enter this shadow world seeking a religious mystery, and in the end, they don't find it.

That's why it's probably okay if your character has flamboyant superpowers. It may not be very "gothic punk," but neither is "having a life that does not completely suck."

Let's see, a couple of odds and ends left. This is probably the first appearance of the ecumenical Celestial Chorus. They'd been explicitly Catholic before, but now they're a pretty loose coalition of universalists. Not just Catholics and Protestants, but also Muslims and Goddess Worshipers. Anyone who's more or less monotheist, basically. I'm surprised this version of the Tradition is showing up so early. I thought the hippy version from later books was a course correction, something that came along when the White Wolf writers outgrew their rebellious goth phase and could grudgingly admit that some types of Christianity are okay, I guess. That still may be what happened, but  the timeline still surprises me.

On the less optimistic front, this book still falls into the period when White Wolf was being weird about the Roma. It's a clueless 90s American thing. There's no anti-Roma hatred, exactly, but it's doing the same damn thing that The Complete Bard's Handbook did where it very casually uses a certain racial slur and uncritically accepts every stereotype about the Romani people, but then somehow decides that they sound awesome. All you really need to know is that custos can be supernatural creatures like familiars and dragons, vampires and werewolves, or . . . Roma.

It's a tricky question, because it's wildly inappropriate that White Wolf wrote a book called World of Darkness: Gypsies where the Roma are revealed to have magical powers based on pop-culture stereotypes. And it is just as gross that one such character, built from the rules in the sourcebook, shows up here as a sexy rogue. And yet, the whole point of mage is that everyone gets ethnicity-based superpowers, so it would be weird if the Roma somehow got left out, and sexy rogues are generally a welcome addition to an rpg setting. I think it would probably have been easy not to notice, back in 1995.

That's probably room enough for me to forgive it. Well-meaning stereotypes in a game that is full of them, but which are also kind of fun. Just chalk it up to a different time. But why would I bother? Between Sorcerer, Revised and The Guide to the Traditions, everything in this book is going to be reprinted with better rules and flavor. 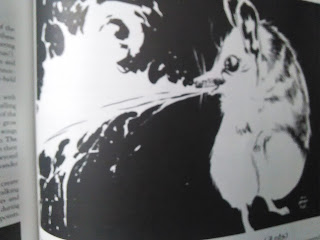 How could I pick anything but this cute little guy. Fire-breathing hamster!

John Frazer
Theatrically comprehensive stunt blogging since 2014. It's a good way to kill time at the night job. You can reach me at srgrvsalot@yahoo.com All of my work is licensed under the Creative Commons Attribution and Share Alike license. Can't imagine any commercial use you'd get from any of this, but knock yourself out.

In the interest of helping out my fellow internet authors, I'll add a few PDFs to my list. If you are officially connected to a game and you want me to review it, just send me a link or a review copy over email at srgrvsalot@yahoo.com
It's first-come, first-serve and my goal is to try and get through one a week, so there may be a wait, but the whole point of this blog is to get through everything eventually, so unless I completely burn out, I'll get through them all eventually.
Misfortune - Dramatic Roleplaying
Cosmic Cutthroats RPG
Enthusiastic Pirate Bois
Player's Guide to Fonts of Power
Trail of the Vagrant Star
Alpha-7
Genius: the Transgression
ESPRE Essential Players Guide
Mice-men of Mirewald
Academy Arcana
Ops & Tactics: Modern Combat Manual
Trinity Field Report: Oceania
Arc Quickstart
Sufficiently Advanced, 2nd Edition
Sorcerously Advanced
Trinity Continuum: Amalgamated Idea Dynamics
Trinity Continuum: Pets
Trinity Continuum: Polyphemus
Trinity Continuum: Les Fantomes
Swine and Cheese Party
Monster Ambulance