Ooh, this was a fun one. Monster books are always so easy. Come up with a weird fantasy creature and white a page about it. Very difficult to screw up. Even when you're dealing with the occasional dud, some new idea is only a page away.

The Planescape Monstrous Compendium Appendix has a higher hit rate than most, thanks to having a strong theme (monsters you might find in heaven or hell) and the ability to cherry pick from the best of previous Monstrous Compendiums (according to the title page, MC8 "and other sources"). Its main weakness is that it's an AD&D monster book, and thus it's only intermittently cognizant of its monsters as elements of a story.

I'll give you the most extreme example - The Translators. They are "messengers of the powers of neutrality" and already we're off to a shaky start, but other gods use them too so there is, at least, the potential for plot. And they are, themselves, kind of neat - elaborately-decorated silver orbs that glow with celestial light and speak every language, intelligent in their own way, but with no desire other than to deliver their messages. Your DM presents you with a situation where you have to heist the theo-mechanical construct containing the direct word of a living god, that's a pretty tight adventure.

Now, the ridiculous part. If you tamper with one, your actions will be noticed, and the god whose word you stole will intervene to try and stop you. It's not ideal that this is automatic, because read strictly this shuts down the heist plot, but it's not that big a deal. Just adds one more step to the theft. However, the mechanics of how the gods intervene are absolutely off the wall. Roll 1d100. On a result of 1-99, the god sends an aasimon (angel). If the result is 100, roll again. If this second roll shows 1-99, the god sends 1d6 + 1 angels. And already this is the most AD&D thing imaginable . . . except if the second result is 100, the god itself shows up. . .

The book is asking you to roll a d10,000. Who designs an encounter like that? I guess it's comparable to botching a 10-die roll in the Storyteller System (6 in 10,000 chance, assuming a target number of 6), but that's a worst-case scenario for including a "triggers on botch" effect. A much more likely scenario is 6 dice vs target number 8, which has roughly the same chance of happening as rolling a natural 1.

Although the more pertinent question is why you're leaving the appearance of a literal god up to an arbitrary roll of the dice. Either you want "potentially drawing the ire of a vengeful deity" to be part of your adventure's stakes, or you don't. So you tie the appearance of the god to the PCs success or failure at various objectives within the scenario, building tension by narrating closer and closer near-misses until a final, fateful roll. You don't just slap four d10s down on the table and pretend that if you roll all 0s, it's completely out of your hands.

Likewise, the number of enforcer angels that show up should be determined by the sensitivity and importance of the message, which is itself, presumably, scaled to what your PC group are qualified to handle (i.e. do the quest at level 1, intercept a farmer's request for rain, do it at level 20 and you have to stop the order that starts the apocalypse). Sometimes 1 and sometimes 1d6 +1, depending on the whim of the dice, doesn't make any sense, even from a "rules as physics" point of view.

The Translators' backup roll is merely the logic of the book taken to the extreme, though. Even the more lore-heavy entries still stumble at addressing how the monsters are likely to be used in play. By the very virtue of being a Monstrous Compendium, the text misses out at developing its various fiends, angels, and elementals into vibrant characters that occupy a niche in the Planescape setting.

Take Arcanoloths. They're these dapper, nerdy jackal-demons who negotiate mercenary contracts for their fellow demons, and half their entry is about how to fight them. Nothing about stealing their scrolls or shaking them down for information or hiring them to represent you when the Harmonium puts you on trial in Sigil.

I mean, look at this guy: 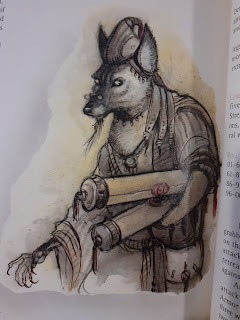 Do you want to fight this guy? Or do you want to run into him in a seedy extraplanar bar and listen to him complain about his job and hey, maybe you could help him out, he could make it worth your while?

When I posted about the Planescape Boxed Set, I saw comments to the effect that Planescape was meant to be TSR taking aim at White Wolf, but if so, they missed a key element - the talking bits are way more fun than the fighting bits, and this first Monstrous Compendium doesn't give us near enough talking bits to work with. I suppose that's probably a side-effect of being largely legacy material, collated and reprinted to coincide with the new setting, but written long before Planescape was even a thing.

Anyway, my complaints thus far have given the impression that I'm much more down on this book than I really am. I actually enjoyed it quite a bit. The best part, as Mr Arcanaloth up there can attest, is the art. There are so many spectacular pieces that I'm tempted to make this a big art post. My favorite is the Night Hag 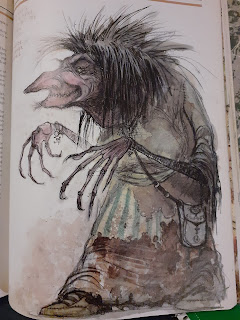 This lady is definitely going to feed me a poison apple and I love it, but almost every monster portrait is distinctive, inspiring, and fun. . . except maybe some of the monsters whose deal is that they look like beautiful women. Like, okay, I get why the succubus looks a little porn-y, fair enough. And the Erinyes is supposed to be a terrible spirit of vengeance and not a lingerie model, but the monster description was way off base, so I can't really pin that on the artist. But why is the sexy cat lady staring directly into my soul? And the tiefling is just gratuitous.

Still, if I'm reading the credits page correctly, the whole book was illustrated by just one guy, which is wild to think about. I hope TSR compensated Toni DiTerlizzi well, because he has been carrying this whole setting so far. I'm hoping that as we go on, we'll start to see some writing that consistently rises to the level of the art design.

Ukss Contribution: Despite my backhanded words, a lot of the individual creatures were pretty interesting. I really liked the mephits as a group, though I was a bit shocked when I took a closer look at the stat block and realized they were canonically 5 feet tall. It's a weird decision because they're these comically annoying mascot characters and absolutely adorable if you imagine them as 1 foot tall (which I always did when I DMed Planescape back in the 90s). I guess they don't lose much by being the goblins of the elemental planes, but the sensation of being so wrong for so long is a little jarring for me.

Anyway, my favorite variety was the dust mephit 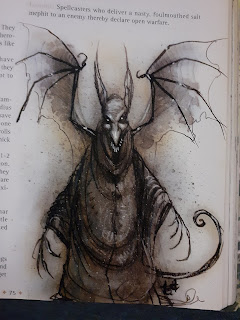 They don't just look goth, they say things like "A dust mephit I am, lest dust I become!" OMG! Sooo cuuute. I'm going to continue picturing them as 1 foot tall, though, because that's the size of the plush I desperately want to buy from Hot Topic.

In the interest of helping out my fellow internet authors, I'll add a few PDFs to my list. If you are officially connected to a game and you want me to review it, just send me a link or a review copy over email at srgrvsalot@yahoo.com
It's first-come, first-serve and my goal is to try and get through one a week, so there may be a wait, but the whole point of this blog is to get through everything eventually, so unless I completely burn out, I'll get through them all eventually.
Misfortune - Dramatic Roleplaying
Cosmic Cutthroats RPG
Enthusiastic Pirate Bois
Player's Guide to Fonts of Power
Trail of the Vagrant Star
Alpha-7
Genius: the Transgression
ESPRE Essential Players Guide
Mice-men of Mirewald
Academy Arcana
Ops & Tactics: Modern Combat Manual
Trinity Field Report: Oceania
Arc Quickstart
Sufficiently Advanced, 2nd Edition
Sorcerously Advanced
Trinity Continuum: Amalgamated Idea Dynamics
Trinity Continuum: Pets
Trinity Continuum: Polyphemus
Trinity Continuum: Les Fantomes
Swine and Cheese Party
Monster Ambulance