I was worried about this one. After Arabian Adventures, I feared that anything born of the Al-Qadim setting would have all the same faults. But from my, admittedly almost entirely ignorant, viewpoint, The Complete Sha'ir's Handbook looks . . . kind of okay.

Don't take that as a final judgement. I suspect that a part of this is simply that I no longer have someone else's notes to crib from. However, if you're willing to accept that I'm attempting to apply what I learned from the Asians Represent livestream, then this book is not entirely blameless, but also manages to avoid the worst of its progenitor's excesses.

I think it's because of the subject matter. Zakhara is a fantasy setting that's ostensibly based off a real place, and thus when you talk about it in general, you're in some sense talking about a reflection of real Arabs. Any stereotypes you have floating around in your head wind up making their way in. Whereas this book talks the most explicitly fantastical people in the setting, so there's no temptation to try and make them "realistic."  You're not getting anything like "oh, that's not the historical genie summoners did things."

So there's some mentions of "honor" and some mentions of "station," and one really bad sentence that I'm sure was only as bad as it was because the author didn't know the definition of the word "concubine," but largely this is a book that's more concerned about astrological conjunctions, cunningly crafted sword-wielding crab robots, and the politics of the genie realm. It's mostly too busy to be racist.

I think. This is a tricky question. Orientalism, as a form of racism, is all about othering people, treating them as "mysterious" and "exotic." For a regular person, this is demeaning. But wizards are supposed to be mysterious and exotic. It's practically part of the job description. At the very least, they're weird people with weird interests who are constantly on the lookout for weird things like eye of newt or the severed hand of a condemned man. Their methods and habits are supposed to clash with your everyday common sense, because what they do is magic. If there was a clear, explicable connection between cause and effect, anyone could do it.

And it's this willingness to make mages strange that makes this book and The Complete Necromancer's Handbook the only two objectively good magic books I've read for AD&D so far.  The Complete Wizard's Handbook seemed determined to make them ordinary trades-people (half the kits were simply reskins from the Complete Fighter's Handbook, for crying out loud), about as mysterious as your local blacksmith.

It's actually kind of instructive to look back at TCWH's Wu Jen Kit to demonstrate why I think this book here avoids the worst case scenario. The Wu Jen were 1990 AD&D's attempt at an "oriental" wizard, and it was racist as hell. The existed to "add a touch of oriental intrigue and exotic culture to a western-based party" and their special hindrance was ritual behavior that "may seem trivial or even ridiculous to other characters."

That was the wrong way to do it. The Wu Jen are only mysterious as a function of where they're from. They're the stoic, inscrutable Asian man - "It is unlikely that the Wu Jen shares the party's goals or moral code; if he agrees to join the party, it is probably due to his intellectual curiosity." Sure, because no Asian person was ever motivated by gold, glory, and adventure. And their "strange taboos" are so hard to understand, like a regular "western" wizard isn't carrying a bag of bat shit around with them in case they need to light something on fire.

The Complete Sha''ir's Handbook doesn't do that. There's one use of the word "exotic" on the back cover, and I think it shows up once in the first chapter, but even though it introduces a half-dozen unique mystical practices, the main reason for its characters to do something strange is because they know something regular people don't.

This is a book that very clearly takes inspiration from the golden age of Islam. Things we learn about Zakhara in this book - "The people of Zakhara have a relatively sophisticated system of numbers, including a mathematical system that is second to none," their astronomical knowledge is similarly advanced, and a few of their more daring mages have begun experimenting with steam engines. That's why they have access to the Digitologist, the Astrologer, and the Mechanician kits.

It's kind of a shame that the mechanics are as half-baked as they are, because there's a lot of fantasy potential here. You've got things like the kit that weaves spells into magical pieces of cloth or the ghul lords whose spells are accompanied by spooky special effects (ghostly lights, sinister whispering, temporarily adopting a skeletal visage, etc). This is what magic users should have been the whole time - people with highly specific, highly flavorful magical abilities that fill a distinct niche. In fact, the biggest flaw with most of the kits in this book is that they're "Wizards."

There's always been a somewhat nebulous boundary between a Kit and a Class. Kits modify classes, adding a special bonus in exchange for a special hindrance. However, the limits on what counts as a "special bonus" are never defined. So, in theory, you could have a "special bonus" that was an elaborate new game mechanic or level-by-level menu of special abilities, and a "special hindrance" that amounted to losing your base class' signature ability, and that would be a Kit, despite being a new class in all but name.

Which is largely what's going on in this book. The Ghul Lords don't cast spells so much as use "manipulations" of negative energy to attack, defend, or travel. Their magic is fueled by their own life energy and while they can mimic certain effects, it's always tainted by their dread power. The Mechanicians build robots, and these robots can use spell-like effects based on which wizard spells the Mechanician knows, but the character themselves can't cast spells.

And the Spellslayers . . . well, they're an example of TSR almost accidentally discovering good class design. They don't cast spells at all, but they do gain thematically appropriate spell-like abilities at every level that are narrowly tailored to allow them to fulfill a gameplay niche (anti-wizard assassin) and they really should have been a Warrior or Rogue subclass.

I guess what I'm saying is that the magic in The Complete Sha'ir's Handbook is very clearly being different for the sake of being different, but the sense I got was more one of exploration than of attempting to make their setting seem strange and foreign.

Or maybe that's wishful thinking on my part. Because I really do think this book is doing what wizard books in general should be doing, and I'm not sure if that's a coincidence or not. Like, maybe the whole thing is Orientalist in its very conception. There's this exotic foreign land and your mandate is to make it as unrecognizable as possible in order to sell the foreignness and exoticism, and in the process you accidentally invent High Islamic Steampunk.

Or maybe I'm being paranoid here, and the real explanation is that someone was given an assignment and they knocked it out of the fucking park. "The Book of Ingenious Devices was cool as shit, let's make a class out of that."

It's probably some combination of both. Let's talk about secret societies.

This is another one of the book's ambiguities. Wizards and secret societies just go together. If we were talking about Mage: the Awakening, we wouldn't even be having this conversation right now. However, one of the secret societies introduced in this book is called "The Viziers," and their whole deal is that they are an all-female order who are "masters of seduction, interrogation, and intelligence, often able to gain information from targets who will never know they let their secrets slide."

That feels like a trope to me. The art that accompanied this group made me kind of uncomfortable too: 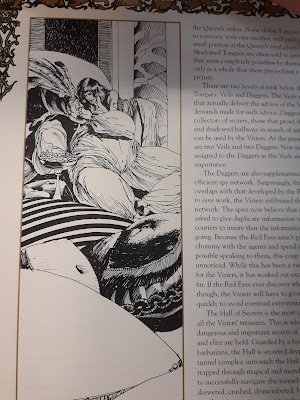 There's a difference between using medieval Arabia as the jumping off point for designing a new fantasy world and in basing your fantasy world off the "Hollywood Arabia" genre. The Complete Sha'ir's Handbook walks it a bit better than Arabian Adventures, but it's far from perfect, and honestly, I could not tell you precisely where it crosses over, but the art in general, and that picture in particular, are definitely on the wrong side of it.

Overall, I can't tell you exactly where I land on this one. I'm never going to play AD&D again, so I could just virtuously foreswear the book and that would be easy good-boy points with no downside for me. However, if I'm being honest, I actually enjoyed it quite a bit. There are ideas here that I would love to see fleshed out in better games. More genie politics! More crab-bots! More spooky semi-undead wizards! And so my relationship to this book must remain complicated.

Ukss Contribution: It has its inappropriate moments, but it's not by a longshot the worst book I've read (hell, it's not even all that comparable to the other Al-Qadim book I've read). So I will go with an Ukss contribution this time, and there's only one thing it could possibly be - crab bot! 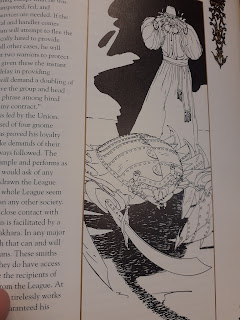