Let's take these bad boys one at a time.

It was kind of neat. It had hundreds of paragraph-long encounters that would branch into each other to lead me through the plot. It was nearly impossible to read. Imagine page after page of things like this:


I made the decision early to just play through the adventure as intended instead of trying to read it like a book. And it went pretty smoothly. I inadvertently cheated a few times, because I accidentally skipped over the random encounter rules, but then I balanced it out by mistakenly rolling for more random encounters than necessary. (The rules are at the start of section V,  and only apply there, but I used them for sections T and C.)

Also, there was some ambiguity as to whether I succeeded at the quest or not. You're supposed to bring the evil Baron some unrefined gold, weighing 1000 coins (Dungeons and Dragons uses "coins" as a measure of weight). I had 700 coins worth from the expedition and 800 regular coins. I counted that as a win, because surely the Baron would understand that gold is gold, and if we're just going by weight, then 300 actual gold coins are better than the exact same amount in lump form.

But then again, maybe the standard gold piece is adulterated, mixed with other metals. But if the coins are at least 3/8ths gold then the Baron would come out ahead. The book didn't give me much guidance either way. I'm inclined to award myself victory, because of course, but reading the rules as written, I probably shouldn't have. It certainly doesn't make sense for the Baron to set a 1000gp ransom when your character starts with 750gp.

Overall, it was pretty decent. It was like playing a really short adventure game where I had to track my inventory with a piece of scratch paper. I'd have gotten a lot of use out of it when I was a kid, but now I can just play an adventure game whenever I want . . .

Still, a pretty cool thing to own.

UKSS Contribution - nothing in this adventure is particularly well-described or distinctive, so it's hard to choose, but I guess I'll go with Three Sisters Island, where you receive a vision of the three sisters of the sea and they teleport you to some other island.

Blade of Vengeance
This was a traditional solo adventure of the sort I was expecting when I started with this batch.  It's D&D, but with only one PC. It's also the best story out of the bunch, though that's not saying much.

You're an adventurer who returns to her hometown just in time to see it destroyed by a dragon. Swearing vengeance, you track down the final resting place of the hero that slew the dragon's grandfather so you can get his special dragon-slaying magic items.

A simple enough story, but the tone is all over the place. Halfway through, you encounter a mischievous nature spirit who steals one of your magic items, and there's a lighthearted detour from the main quest while you sort it out. All the while, the adventure is assuming you're pursuing this in a well-focused, but mercenary manner. The text goes out of its way to point out how much treasure every character (no matter if it's a wandering monster, friendly NPC or random halfling townsfolk) is carrying. The bizarre treasure focus reaches it's zenith in the dragon's lair itself, where you notice a tapestry worth 1500gp . . . depicting the dragon's grandfather destroying a village.

I misread that entry the first time through. I thought the tapestry was of the same dragon you were trying to kill. And I laughed my head off. I guess my imagination went even farther than the (misread) text and I just pictured the tapestry as showing the destruction of the main character's village. Like, while the PC was off chasing faeries and communing with the ghost of an ancient hero, the dragon had somehow commissioned and received a tapestry of itself. And that tapestry just happened to be so well done that it had already received critical acclaim and an appraised value of five years' worth of workman's wages. The image of Erystelle doing a double-take as she walks past is one that's going to stick with me for some time.

Ultimately, though, what hurts Blade of Vengeance the most is that its story doesn't have a proper arc. You've got the dragon attack at the beginning, a whole lot of filler with no particular symbolism or thematic weight, and then the confrontation at the end. Structurally, it's a mess.

Also, it seemed like every other monster in this quest had a sword +1. I noticed at least four, not counting the main characters, which honestly makes them seem less magical.

UKSS Contribution - I have to go with Wally, the Halfling elder. This is another case of me misreading the book, but this time I'm doing it on purpose. Here's how he's described:

No matter when Erystelle calls, Wally will be in his dressing gown and will have a pipe in his hand.

Now clearly, this just means that the adventure wasn't going to go through the trouble of writing out this minor character's entire daily routine. But I'm choosing to interpret it to mean that he just goes around all day in his pajamas, possibly as a result of whatever is in his pipe. I'm certain that I could have a lot of fun pairing that personality with some other authority figure in the world of Ukss.

Mystery of the Snow Pearls
For this one, I'm going to let an image do the talking. 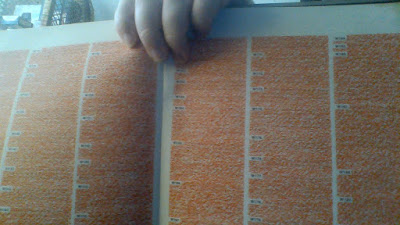 The whole book is like that, except for a few paragraphs of explanation. Apparently it originally came with a "magic viewer," which I'm guessing is a small piece of red plastic film that has long since been lost. I may come back to this book if I ever find something suitable, but until then, I guess this one was super easy.

Quest for the Heartstone
The simplest of the five adventures (probably). You and a team of your friends are just chasing after a Macguffin because you're being paid to do it. I remember the blurb on the back not doing an adequate job of explaining why the Queen needed the Heartstone to rule, but that turned out to have a very simple answer. The Heartstone gives its wielder the power to read minds, which she intended to use in her courtly intrigues. Which, you know, fair enough. She'll need all the help she can get, what with being the 35 year old wife of a man who died at the age of 82.

Okay, it was a different time. And surely good ol' King Ganto was a decent man. But geeze, there's no version of that relationship that leaves me feeling comfortable.

The quest itself is fairly boilerplate. You go through a trap-ridden dungeon, fighting monsters and getting a bunch of incidental treasure. The high point is the "wellevator," a magical elevator built in a well. Or perhaps the cursed scroll that turns whoever reads it into a pixie for one week. Or maybe the return of the water termites (which also showed up in Lathan's Gold - I may have underestimated the broadness of their appeal).

No, actually, the best thing is the NPC line "we are providing you with a pair of tongs." The queen's advisor doesn't want the PCs to touch the stone, presumably because they might then covet its powers for themselves, but even if the stone were actually as dangerous as implied, it would still be a ridiculous line. Tongs are, like, what, 2 cp? To present them as if they were some piece of specialized equipment generously being bestowed upon the adventurers is just ridiculous.

The worst thing about the adventure is the way it took every opportunity to advertise the official D&D line of figurines. They even based the preconstuct characters off the toys. And only 3 of the 18 were women. Which doesn't say anything good about either D&D culture or toy culture circa 1984.

UKSS Contribution - The Prism Wars. The module didn't say anything about them, just that they happened 50 years ago, under the rule of the previous king. I just think the name sounds cool.

Twilight Calling
This adventure has one critical flaw. The negative consequences of the plot only happen because the PCs get involved in the plot. The gates to the ancient prison of the Carniflex were in no danger of being opened until the PCs went to the seven magical realms to retrieve the keys. If they had just decided to say, "let's not get involved," nothing would have happened and the status quo that had endured for thousands of years would endure for thousands more.

Technically, an evil god tricks the PCs, by pretending to be a mad prophet who predicts the coming disaster, but at no point is that revealed and the PCs can't do anything about it.

The adventure itself is adequate. You go to seven different mini-dungeons, each of which has its own theme. Some of them are overly precious, like guardian who challenges you with three-card monte and then gives you a hint in the form of a pun. And the adventure as a whole suffers from that old D&D thing where there is a lot more combat than is necessary. Like, narratively, it doesn't contribute the story to be attacked by a dragon out of nowhere, but it does pad out the length.

Although, the part of the adventure where you go through the Carniflex kitchens and have to avoid falling into a pit of poisonous barbecue sauce was pretty amusing.

UKSS Contribution - Rainbow Knights. They don't have any deep description. They're just a monster you might fight if you flub the riddles on the rainbow bridge, but I think they might have fought in the Prism Wars.

Group Summary
I've never really used pre-made adventures and this group of five shows me why. Their pacing was weak and they don't really mesh with my interests or humor. Creating something from scratch is the only way to make sure it fits me perfectly.  Maybe if I'd had more experience in using them, I'd also have a better intuition for how to adapt them to my style, but that's just speculation at this point.

Unfortunately, nothing in this batch of adventures sold me on the concept. That was pretty predictable. I got all of these in a big bundle from a stranger I never met, but I would never have bought them for myself. They are from a genre of fantasy I don't particularly care for from a period of time that I can't really relate to. I'm glad to have read them, but I'm also glad I don't have to read them again.
Posted by John Frazer at 12:46 PM

John Frazer
I am a creature of the night - Blah! Okay, maybe not that dramatic, but I do work the night shift, and I have a lot of time on my hands. Time to do things like, say, blogging. I like to pretend it's a type of productivity.